Musical Notes
Numbers 1 to 7 represent the seven scale degrees in a diatonic major scale. For example, in C major, the numbers correspond to the notes and the solfège as follows:

Note: G A B C D E F♯
Solfège: do ré mi fa sol la si
Notation: 1 2 3 4 5 6 7
Octaves
A dot above a musical note raises it to a higher octave, while a dot below a note lowers it by an octave. For example, “6” with a dot below is at an octave lower than “6”. Musical scales can thus be written as follows:

Natural minor scale: 6 7 1 2 3 4 5 6
· ·
The number of dots equals the number of octaves raised or lowered. Where there is more than one dot above or below the number, the dots are vertically stacked.

Where there are note length lines (see section on “Note Length”) underneath the numbers, any dots are placed below the lines.

Chords
Chords are represented by vertically stacking the notes, with the lowest note at the bottom as with Western notation. Each note has its own octave dots, but only the lowest note has the length lines (see section on “Note Length”).

Arpeggiated chords are notated by writing the standard Western arpeggiation symbol (q5481761) to the left of the chord.

A dot after the plain or underlined note increases its length by half, and two dots by three quarters (similar to a dotted note in Western notation).

The underline, along with its joining, are analogous to the number of flags and beaming in standard notation. So are dotted notes. But the analogue stops at notes worth 3 quarter notes and beyond, where dashes are used instead. 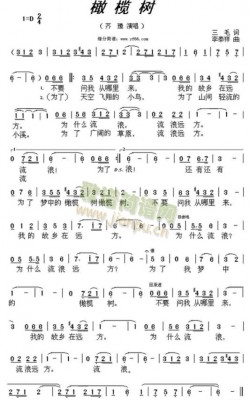 Undetermined Pitch
When notating rhythms without pitch (i.e. for unpitched percussion instruments), the symbol “X” or “x” replace numerals. For example, a common clap pattern used in cheers can be written like this:

When several lines of music are notated together to be sung or played in harmony, the bar lines usually extend through all the parts. However, when notating music for a two-handed instrument (such as the guzheng), it is common for the bar lines of each hand to be drawn separately, but a score bracket to be drawn on the left of the page to “bind” the two hands together.

Accidentals and Key Signature
The numbered notation uses a movable Do (scale degree 1) system. The key signature defines the pitch of “1”. For example, “1=C” means “C major”. Minor keys are based on the natural minor or the Aeolian mode, and the key signature defines the pitch of “6” of the minor key’s relative major. So “6=A” means “A minor”, the tonic of which is written as 6. Naturally, the Dorian mode of D should be marked as “2=D” and based on 2.